“If the Chancellor is looking for cheap, reliable, energy independence, he is backing the wrong project, as Sizewell C’s ultimate cost and technical reliability are so uncertain and building it is reliant on French state-owned EDF. Green-lighting Sizewell C also loads more tax onto struggling households, who would be forced to pay a nuclear levy on bills for a decade before they could light a single lightbulb. Despite the Chancellor’s statement, Sizewell C still needs financing, and with at least a year before it’s decided whether it will finally go ahead, we’ll keep fighting this huge black hole for taxpayers’ money, when there are cheaper, quicker ways to get to net zero.”

Kwasi Kwarteng has today laid out plans that will make it more difficult to challenge damaging infrastructure, including Sizewell C. See https://assets.publishing.service.gov.uk/government/uploads/system/uploads/attachment_data/file/1105989/CCS207_CCS0822746402-001_SECURE_HMT_Autumn_Statement_2022_BOOK_Web_Accessible.pdf

[Page 21] New legislation will be brought forward in the coming months to address barriers by reducing “unnecessary burdens” to speed up the delivery of much-needed infrastructure, including
• reducing the burden of environmental assessments •
reducing bureaucracy in the consultation process
• reforming habitats and species regulations
• increasing flexibility to make changes to a DCO once it has been submitted.

Sizewell C is included on a list of “infrastructure projects which will be accelerated as fast as possible, aiming to get the vast majority starting construction by the end of 2023.” [Annex B]

Stop Sizewell C said “The idea that reducing the burden of environmental assessments, bureaucracy in the consultation process and reforming habitats and species regulations are appropriate for a project such as Sizewell C – wholly within an AONB, next to Minsmere and surrounded by rare habitats – is deeply dismaying. In any case, a significant proportion of the delays to the Sizewell C planning process have been down to EDF stalling and changing its delivery ideas rather than the planning system. The Chancellor wants to ride roughshod over the ability to fight damaging projects.”

She said green levies would be temporarily suspended but gave no indication of how long such a suspension would last – potentially the two years that the energy bill price cap would be frozen for. Sizewell C can only be financed by adding a nuclear levy to struggling households, because the markets won’t touch it without being guaranteed money back during construction. (Nuclear is not green, but a Treasury led public consultation on the “taxonomy” of nuclear energy is expected this autumn.) Does this mean Sizewell C could not start during such a freeze?

She said “Great British Nuclear” would be launched later this month, but Sizewell C is not British. It has been developed by two state-owned entities, EDF and CGN, and EDF will have to manage construction. It’s also likely that overseas funders will be necessary. The UK’s nuclear industry is reliant on overseas uranium. Sizewell B is currently fuelled by enriched uranium from Russia and the fuel for its next outage (ordered before the invasion of Ukraine) is from the same source.

Ms Truss announced a Net Zero review and said the Business Secretary is to set out a plan in the next two months on how to make the UK a net energy exporter by 2040. The UK has been regularly exporting energy to France in recent months given that such a high proportion of French nuclear reactors have been offline.

Ms Truss also said that renewable and nuclear generators would move onto Contracts for Difference which would break the price link with gas, but it is unclear what this might mean for Sizewell C, which is expected to be financed via a Regulated Asset Base

Stop Sizewell C says: “By suspending green levies Liz Truss has backed herself into a corner. Slow, damaging, £30 billion Sizewell C can only be financed by adding a nuclear levy to struggling households, because the markets won’t touch it without being guaranteed money back during construction. Her government’s review of Net Zero should conclude that Sizewell C must be cancelled.”

A Survation poll for the Mail on Sunday shows overwhelming support for renewable energy, with 74% backing investment in solar, 69% in offshore wind, 64% wave and 63% onshore wind and tidal, compared to just 38% for nuclear. A further 69% backed energy efficiency.

Calculations by Professor Steve Thomas of the University of Greenwich Business School for Stop Sizewell C, suggest even optimistic assumptions about inflation and the overall cost of Sizewell C will increase the burden on households well above the government’s estimate of “£1 a month”.

Stop Sizewell C says: “If Liz Truss wants to cut green levies on energy bills and avoid being accused of complete hypocrisy, she will have real trouble supporting Boris Johnson’s last-ditch attempts to tie her to Sizewell C. This slow, damaging £30bn project can only be financed by adding a nuclear levy to struggling households, because the markets won’t touch it without being guaranteed money back during construction. The irony is that the government intends to try and re-label nuclear as “green” – which it certainly isn’t – making Liz Truss’s promise even more of a contradiction.”

A Treasury led public consultation on the “taxonomy” of nuclear energy is expected this autumn.

Liz Truss’s dilemma was highlighted by a Survation poll for the Mail on Sunday shows overwhelming support for renewable energy, with 74% backing investment in solar, 69% in offshore wind, 64% wave and 63% onshore wind and tidal, compared to just 38% for nuclear. A further 69% backed energy efficiency.

Calculations by Professor Steve Thomas of the University of Greenwich Business School for Stop Sizewell C, suggest even optimistic assumptions about inflation and the overall cost of Sizewell C will increase the burden on households well above the government’s estimate of “£1 a month”.

Stop Sizewell C condemns Boris Johnson’s visit and support for Sizewell C, speculating that the blessings of an outgoing Prime Minister may be the kiss of death.

“Like multiple vanity projects such as the Bridge to Northern Ireland and “Boris Island” airport, Sizewell C is another Boris Johnson infrastructure blowout that his successor should consign to the bin. When every penny matters, it’s totally wrong to shackle the next Prime Minister and billions in taxpayers’ money to this damaging project, whose ballooning cost, lengthy construction, failure-prone technology [1] and long term water supply [2] are so uncertain.”

“Sizewell C would not be British, nor secure. It would be developed by an arm of a foreign government, probably with considerable foreign ownership and be reliant on overseas uranium.” [3]

Stop Sizewell C urges Boris Johnson’s successor to totally review the Sizewell C project. Candidate Liz Truss has said she plans to cancel green levies on bills, but if she were to continue to support Sizewell C, it can only be financed if a nuclear levy is added to household bills.

The burden on households has not yet been revealed. It is likely to be well over the “£1 a month” claimed by BEIS [4] whose calculations ignore inflation. [5] Campaigners speculate that investors will remain wary of risky Sizewell C unless they are guaranteed a generous rate of return during construction. Boris Johnson’s aspiration of eight nuclear projects will massively increase this burden.

The quoted £20 billion cost now appears to be acknowledged as being up to £30 billion, raising the prospects that a greater sum in equity – expected to be approximately one third, with the remainder debt – will be needed. Investors will only be lured to support the project if  the very high risks of overspends are taken on by the government and therefore tax and bill payers. In recent weeks Simon Clarke, Chief Secretary to the Treasury, reportedly expressed concern that the scale of the investment required would significantly affect spending and fiscal choices for an incoming government.

Stop Sizewell C added: “A truly visionary legacy for Boris Johnson would be to ditch Sizewell C, which is most definitely not green, and focus on cheaper, quicker renewables and insulation, which are.”

Protestors plan to greet the Prime Minister with placards reading “Wrong Decision” but “It’s not too late” #StopSizwellC. 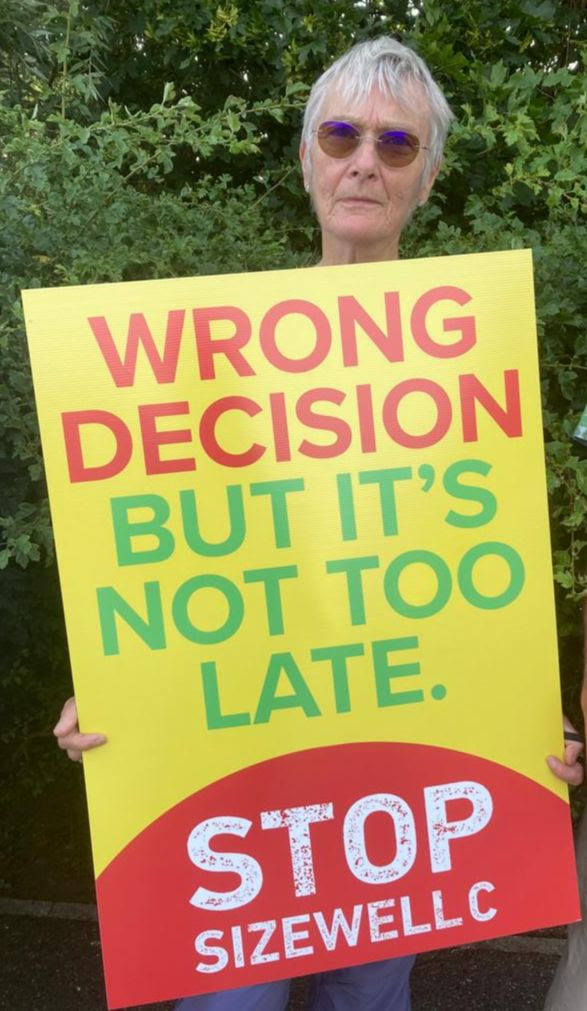 as well as local radio and TV news broadcasts and multiple industry publications.

20 July, Suffolk. Campaigners vow to fight on against the controversial Sizewell C project despite Ministers overruling the Planning Inspectorate, who had recommended it should NOT receive planning consent. The Planning Inspectorate had cited uncertainty of water supply and impacts on protected species and habitats as well as multiple other negative impacts. [1]

“The government has been forced to ram through a damaging project to shore up its energy strategy but the fact that the Planning Inspectorate recommended Sizewell C be refused consent is a huge victory for all of us. The wrong decision has been made but it’s not the end of our campaign to Stop Sizewell C. Not only will we be looking closely at appealing this decision, we’ll continue to challenge every aspect of Sizewell C, because – whether it is the impact on consumers, the massive costs and delays, the outstanding technical questions or the environmental impacts – it remains a very bad risk.“

What’s left of Boris Johnson’s administration should desist from throwing any more cash at Sizewell C or making a Government Investment Decision. It’s deeply concerning, given that households will have to pay for this massively expensive project in times of such hardship, that no one in government is prepared to come clean about how much it will cost to build. [2] How can it be a good use of UK taxpayers funds to support a project promoted by a foreign company having to undergo emergency nationalisation because its own finances are compromised by disastrous nuclear new builds?” [3]

“The political events of recent weeks prove just how quickly things can change, so we are ready to take this seriously flawed project on.”

Campaigners had urged Ministers to delay both the planning decision and any Government Investment Decision [4] until a new Prime Minister is in place. The change in leadership provides an important opportunity for a policy review, especially given this week’s successful legal challenge of the Net Zero Strategy. [5] The preoccupation among leadership candidates with tax cuts and halting green levies on bills [6] is inconsistent with Sizewell C, which would require a nuclear tax on consumers to help meet financing costs during construction, and where build costs, risk and timeframes are high, and difficult to accurately predict. A new Prime Minister and Cabinet should not have their hands tied by a white elephant.

BEIS was forced to farm the decision out to another department after Paul Scully was moved to the Department for Levelling Up, Housing and Communities on 7 July. The Business Secretary of State and Energy Ministers were unable to make the decision due to their promotion of the project.  Campaigners have expressed concern at the potential for bias and predetermination. [7]

BEIS has today published draft reasons for designating NNB Generation Co (Sizewell C Co) as the first step towards the company being able to use a RAB funding model. All financial figures have been redacted. The BEIS press statement says “by publishing the draft reasons for designating Sizewell C under the RAB model, the government is going beyond the transparency requirements set out in legislation.”
Stop Sizewell C said: “It’s outrageous that ministers are hiding the cost to electricity bill payers and the public purse of Sizewell C, while claiming to be transparent. By redacting the finances, it is impossible to know if the Secretary of State’s judgement on Value for Money is sound. We fail to understand why the government would not impose conditions related to the EPR reactor technology, when it has such a catastrophic track record, and one of the only working examples has been offline for almost a year in China”
Additionally we note the following: